There is too much violence in our neighborhood.
Too many bullets have flown over our playgrounds.

The company is polluting the rivers.
The CEO is filling his wallet with dead fish and toasting to the brown water.

Can you picture violence in the neighborhood? What about bullets flying over a playground? You may be able to picture a tube sticking out of a building and dumping generic green slime into a river but is it as powerful as the second image: dead fish floating in polluted water and a greedy corporate officer with a full wallet raising a glass of champagne?

Why do the news programs always cut away from the anchors and go live to the scene? Because we love action. Action is the gas that fills the readers engine. Maybe it’s better to think of the reader’s mental library as a collection of video clips, not pictures. The images should have something happening in them. Look at the examples above. There are bullets flying and CEO’s toasting. Both images involve some kind of action. 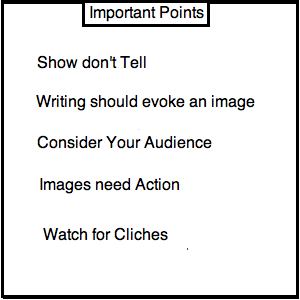 Good images can make an article almost as fast as clichés can break it. Don’t fall into that trap. Be original in your writing. When a phrase is used too often readers can no longer picture it because they know too well what it means. For example: Don’t say, “the blind leading the blind,” say, “walking into walls, hand in hand.” Don’t say, “he’s burning the candle at both ends,” say, “he’s filling his glass under a waterfall.”

There may be times when you have to say something that lends itself very well to a cliché and you can’t find another image to show it. For example, maybe there is something that a lot of work is going into but isn’t progressing. Don’t say, “they’re spinning their wheels,” or, “chasing their tails.” It’s better to not use an image at all. Evoke an image somewhere else. Not every sentence can or should evoke an image. The writing will lose its effectiveness if the readers have to wade through their mental library too much. It's just as important to tell a story with your writing. Check out this article on telling a story in Non-Fiction.

How To Work Through Writing Assignments On Topics You're Not Familiar With...

Emotional Writing: Making Your Reader Cry, or Laugh, or Smile, or Frown, or Cringe...