I look at the world of Gaea, where Defenders of the Realm is set, as a world that's beyond racism and sexism. The Kindred, who protect Gaea and its people, are led by a black woman. There's no bitterness or tension in this fact. The other characters respect her as a talented mystic and an intelligent person. The Fairy Clan in my novel is a race led by women. Women are the warriors, leaders, and healers. The queen is black, but the Fairies are an extremely diverse society. The Fairies are respected for their power and abilities as well.

Defenders of the Realm uses aspects of politics in modern society to provide conflict. While I take a broader approach, focusing on things like the nature of power and ethics in society, I also include some prejudices in this world, which gives the main character, Aleron, an obstacle to overcome. The prejudice doesn't focus on race as much as his cultural background. The feel you should get from reading the novel is that you're dealing with people, and that race and sex doesn't have as much weight as the choices they make. Being black, white, male, or female doesn't make you evil, but acting on your own greed does.

CWD: Like most writers, you hold a day job in addition to writing. How do you find time for writing and how do you keep up your discipline?

Cameo Rowe: While I was a student at Pitt, I mainly used my breaks to work on Defenders of the Realm. So, I didn't go out and party as much as some of my friends, even on Christmas breaks or over the summer. Majoring in English allowed me to work on my writing skills apart from Defenders of the Realm, which I think made my manuscripts better. Majoring in Engineering is time consuming, so I didn't necessarily have a ton of time to work with, but I used it well.

Now that I'm working and continuing my education, my time is constrained a little more. I have to balance promoting the book, writing and revising manuscripts, and pursuing other opportunities now. With limited time, this means drafts get written a little slower. I try to keep writing by maintaining a blog. It's accessible through my website, http://www.cameorowe.com, and also is fed to my Facebook account (search Cameo Rowe Jr) and MySpace page (http://www.myspace.com/thedefendersoftherealm). I don't focus on fiction as much as politics, pop culture, and my thoughts on the writing and publishing process in the blog. I also write for JENESIS Magazine, and interview different artists and businessmen throughout Pittsburgh. I think it's important to stay writing if you want to be a writer, even if it's part time. If you have the passion to write, then finding the time is not a problem.

CWD: I've never talked to an author who didn't have problems somewhere along the line when finishing a project as large as a novel. Did you ever get stuck? How did you deal with writer's block and creative droughts?

Cameo Rowe: Writing the book was never really a continuous process. I wrote in bunches a lot, as opposed to writing 5-10 pages a day, every day. I often find that I get stuck when I'm at a part of the book that I'm not quite sure about. I may have a vision of what happened before, and a vision for what happens next, but not necessarily for where the characters are in a certain passage. Inspiration comes to you in time, and you can encourage that by making sure you take part in different things that stimulate creativity: going to museums to look at art work, poetry readings, watching certain movies. As a fantasy writer, I try not to watch tons of fantasy movies or read tons of fantasy books while I'm working on a project, but I do like to read up on politics and history, which can provide an excellent source of inspiration. Using deadlines can help you too. If there are writing contests coming up, make note of them and use them as benchmarks for when you should be finished a manuscript.

CWD: If I gave you $10 million dollars and you had 5 days to spend it (trust me, it's a very hypothetical question), what would you do first?

Cameo Rowe: My focus is so much on my book, and developing myself as a writer and leader, that I would probably take that money and put it right into my book and other ideas. I'd hire a publicist to help me get the word out about the book, not just in the Pittsburgh area, but on a national level. I'd look into investing in different avenues to release the story, perhaps with online gaming or something else. I'd look into investing in writing programs for young minority students to help them refine their skills as well. I'm not really the kind of guy that focuses on having the houses and the cars and the trappings of success. I think what you do is more important than what you have. 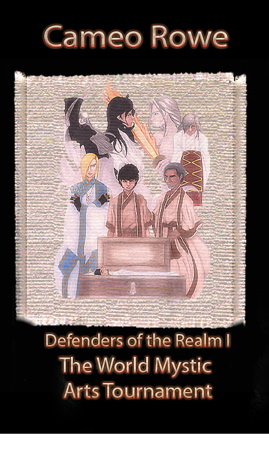 CWD: Self-Publishing is becoming a much more mainstream method for authors these days. Why did you decide to self-publish? What are the benefits and what kind of obstacles are you facing?

Cameo Rowe: I decided to self-publish because I thought that I could get the book into the hands of the right people better, and showcase the quality of the book better by publishing the book myself and marketing it than by sending copies to slush piles. With self-publishing, you basically have to promote the book yourself, and it can grow to be very costly if you're not smart with the decisions you make. However, it provides the possibility of having someone see your work and take a heightened interest. Companies are geared to making money, so they will want to invest in a successful project. It's up to self-published authors to make their work successful. The biggest problem I face now is how to get the book out there to the people who want to read it. If I can reach fantasy fans and provide them with the right information in the right way, Defenders of the Realm will be successful. How to do that is not always clear.

CWD: Can you give us any hints about what's coming up in your next book?

Cameo Rowe: The next book is going to have some interesting new characters come in, both working for the Occult and the Kindred. The next novel takes the theme of becoming a leader and expands on it, making the young mystics see the weight of their actions and deal with intense challenges. Everything in Defenders of the Realm II gets more intense.

CWD: One last question Cameo. Do you have any advice for new or unpublished writers?

Cameo Rowe: Always continue to hone your craft and develop your writing. Develop the confidence to put yourself out there as well. I find that limits a lot of artists.

Check out Cameo Rowe's website www.cameorowe.com where you can read his blog or order Defenders Of The Realm I: The World Mystic Arts Tournament.


Back to Author Interviews Return Home